Your Health is our Primary Concern

Ian works in the Department of Urology/Andrology at Dumfries and Galloway Royal Infirmary. Ian has for the last twenty five years had a special interest in sexual medicine, particularly sexual dysfunction.  This has resulted in the generation and development of a sexual dysfunction service, the service provides assessment, treatment and education for patients and medical colleagues that extends well beyond Scotland Ian is a regular teacher, lecturer and researcher having presented his work at many national and international meetings.  He sits on a number international Advisory Boards and is currently working on the promotion of sexual health programmes across the UK.  He is a lecturer at both Glasgow and Strathclyde Universities and is an active member of both the European and International Societies of Sexual Medicine.

To further enhance his education in the area of sexual dysfunction, Ian has studied for degrees from the Universities of Glasgow, Lancaster and Queens University, Kingston in Canada, during which he has been taught by and worked with some of the world’s leading authorities in sexual medicine.  His work on the dopaminergic response cycle and its impact on libido attracted the interest of television researchers and in 2002 has featured in editions of Horizon for the BBC. He recently provided expert opinion on the BBC Radio 2 programmes His current research interests are The role of testosterone in Diabetes and the potential role for testosterone supplementation in women suffering from sexual dysfunction and the implications of this. He is also researching the changes to female “sexuality” following surgery and has just returned from European Urology conference in Vienna.

As a clinician, Ian’s approach focuses on both the physical and psychological aspects of sexual dysfunction, be it in the male or the female.  He relies on a holistic approach to the patient, the partner, and the relationship, such that therapy, be it pharmacological or psychological, is ultimately directed towards improving the entire sexual relationship between the couple.  This is in contrast to what can sometimes be seen as a “mechanical” approach to treatment e.g. focusing purely on restoration of erectile function or other physiological responses.

With his extensive clinical experience and his diligent attention to academic rigour in the field of sexual medicine, Ian Russell is ideally placed to offer Treatment support and advice. 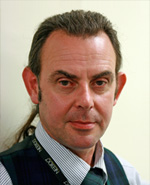 If you can’t find what you’re looking for, or you have a general enquiry, please contact us